As I explained in the comments in the last post, we drastically changed our travel plans and caught a flight yesterday from Puerto Montt to Puerto Natales, far south in Patagonia. Though we’re skipping the entire Carretera Austral region, I don’t think we had the time to do that area justice anyways, and now we have a whole month to enjoy the spectacular mountains in southern Patagonia without rushing around.

Puerto Natales is the gateway to the famous Torres del Paine, one of the most unique and spectacular mountains ranges on the planet. This is my third time here, but Claudia’s first. Tomorrow we’re headed out for at least a full week, possibly more, trekking around the range, and there are many locations there that I haven’t visited previously which I’m looking forward to seeing (and photographing). 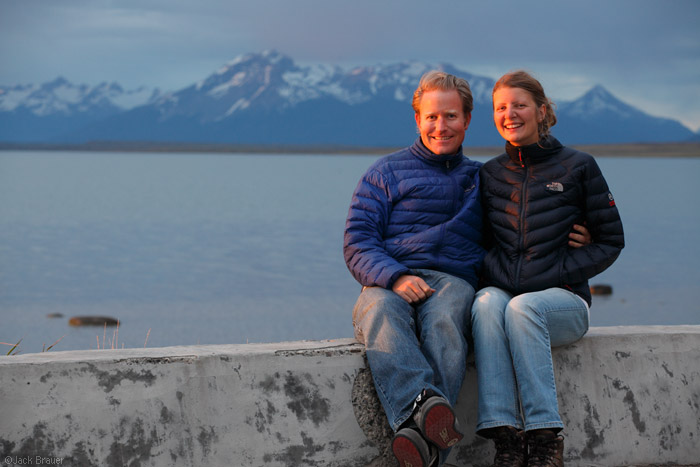 In other news, we just got word that Claudia’s fiancé US visa application, which we submitted in July, HAS BEEN APPROVED!!!! WOOHOO!!! She doesn’t actually have the visa yet – first the approved application will be processed through the Dept of State and sent to the embassy in Germany (which takes about a month – perfect timing with our trip), and then Claudia has to go there and schedule an interview before she finally gets the visa. But, this approval is the main first step – the tallest hurdle in the whole process. The rest is just a matter of follow-through. We are stoked, and relieved!

After waiting in the rain in Puerto Varas for a week, we finally got a better weather forecast and headed out for a six day backpacking trip to the impressive Cochamó valley in Chile. We might have jumped the gun by a day or two, since it rained the entire way up; the ten mile hike was totally wet and muddy, with countless bogs and knee deep creeks to cross.

END_OF_DOCUMENT_TOKEN_TO_BE_REPLACED

Last week we left Pucón and took the bus over the Andes and over the border into Argentina. Our destination: the famous Lakes District town of Bariloche. END_OF_DOCUMENT_TOKEN_TO_BE_REPLACED

The last several days we’ve been in the town of Pucón, at the northern end of the Lakes District of Chile. The beautiful Mt-Fuji-esque Volcán Villarrica rises behind the town, which is situated on the shore of Lago Villarica. Although totally different geographically, Pucón reminds us of San Pedro de Atamaca, in that it’s super touristy, yet has a great relaxed vibe, lots of delicious food, and heaps of activities to do in the surrounding area.

I visited this town in the winter 10 years ago, and am shocked at how much it has changed and grown since then – I can hardly recognize anything about it. I vaguely remember back then one main strip with a few main dusty dirt roads branching off; now it’s a bustling tourist town with a complete network of paved roads, and probably ten times the size. But it still has a great atmosphere, perhaps better than ever. 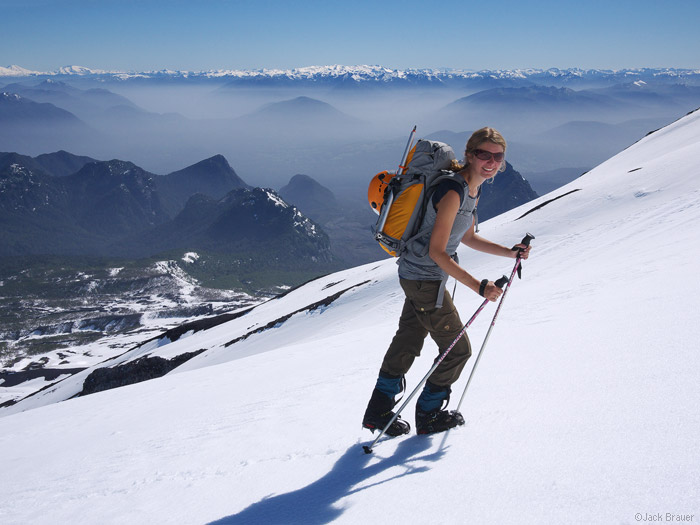 Of course once I saw the snow-smothered volcano, I knew that if we were going to climb it, I’d definitely have to snowboard down! So, I rented a board again and we figured out how to get up there without having to use guide services like most people are obligated to do (just a matter of showing our crampons and ice axes, along with a printed proof of membership in a mountain club – in my case an old email from the Colorado Mountain Club).

END_OF_DOCUMENT_TOKEN_TO_BE_REPLACED 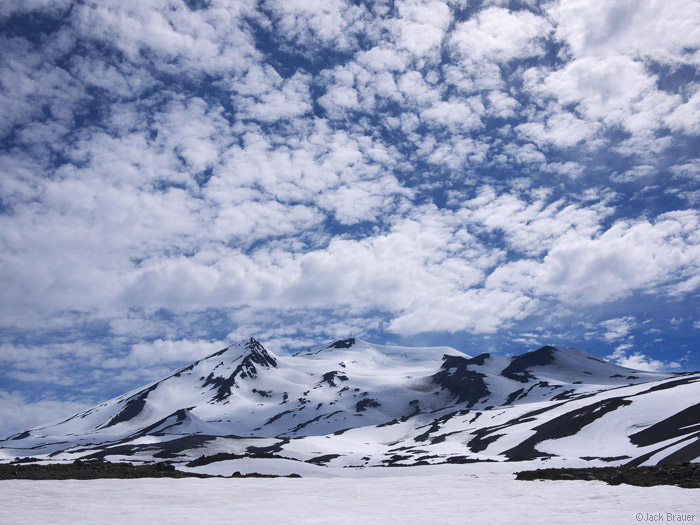 As you could probably guess from the photos in my last post, all the snow in the mountains around Las Trancas had me practically salivating, wishing for a snowboard. Well, on the way down from Valle de Aguas Calientes, we met some skiers and a splitboarder, who told me of a place in town where I could rent a splitboard! Well, I got the board that evening, and the next morning we woke up at the break of dawn and started the long walk to Volcán Nevado, a 3212m (10,538 ft.) glaciated volcano – the tallest one around here. Read more about our big day below! END_OF_DOCUMENT_TOKEN_TO_BE_REPLACED

After our long bus ride south from northern Chile and a quick pitstop in Santiago, we’ve spent the last several days in and around Las Trancas, a sleepy mountain town set in a gorgeous forested valley below two volcanoes. Las Trancas is situated down valley from the famous Termas de Chillán hot springs and ski resort; however, we bypassed the commercial hot springs in favor of a backpacking trek to some remote hot springs on the other side of the mountains. END_OF_DOCUMENT_TOKEN_TO_BE_REPLACED

The last three days were spent along the coastline of northern Chile as we slowly made our way down from Iquique. Along the way we camped a couple times along some of the many rocky bluffs, watched sea lions lounging on the rocks, pelicans skimming the ocean, and big barreling closeout waves pounding the shoreline. Now we are having a layover in the town of Antofagasta today before catching our 18-hour bus down to Santiago tomorrow.

Although the first impression of Antofagasta is not particularly flattering, now that we’ve been forced to spend a day wandering around here it seems like a city that is trying hard to provide entertainment and culture – with its beaches, plazas, pedestrian malls, movie theaters, and the obligatory public outdoor gyms. Nevertheless, we are excited to escape northern Chile and return to greener places! Our next stop is Santiago with a mission to find the mountaineering store there to replace some of our stolen equipment, then down to the mountains in the Chillan area to hopefully climb a volcano and find some more remote hot springs! 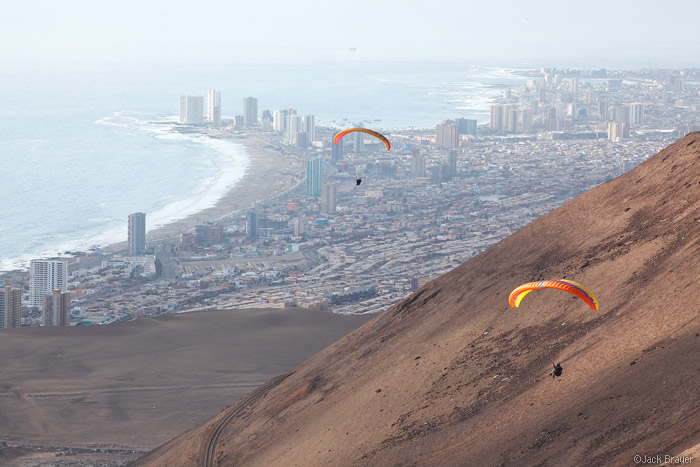 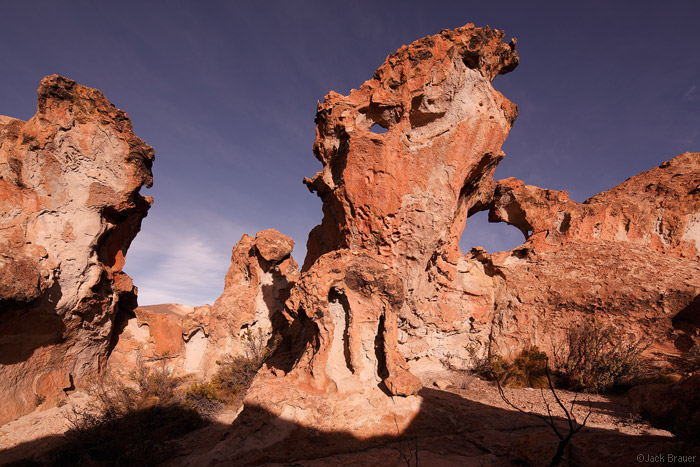 To be honest, I expected the drive back from the altiplano highlands of Salar de Surire towards the coastal city of Iquique to be a barren, boring affair. So we were surprised when about 50-100 km west of Colchane we started seeing a plethora of incredible rock formations along the sides of the highway!

Some of more fantastic looking of these eroded geological sites proved to be inaccessible by roads and would have required a backpacking trek, along with leaving our truck unattended on the side of the highway – both of which we weren’t willing to do at the time. But finally we came upon a section of surreal formations that we were able to access with the truck. 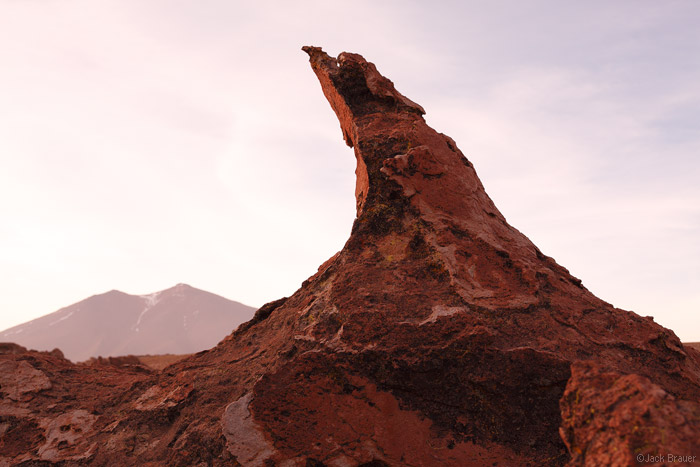 After finding a nice spot to hide the truck and camp, we went on a scouting mission on foot through the convoluted canyon network. With lots of fun scrambling around over rock ridges and through little slots, we eventually found a particularly fantastic area full of surreal formations and even a number of arches! 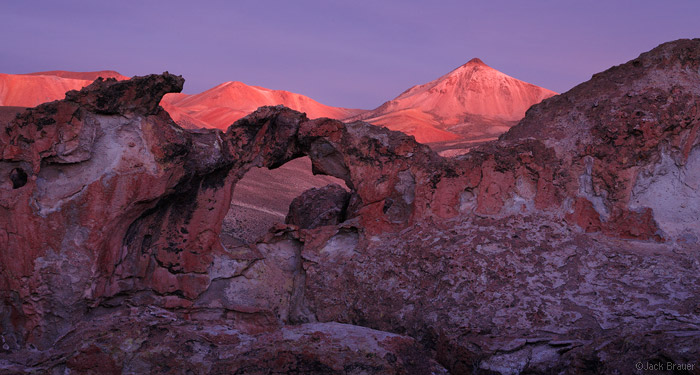 We stayed around there until sunset, having a blast climbing around and photographing the formations. This unknown, unsigned geological wonder would probably be a designated national monument back home in the States, but here it’s just a bunch of rocks and canyons along the highway. I love these kinds of surprises that you sometimes stumble upon when traveling! 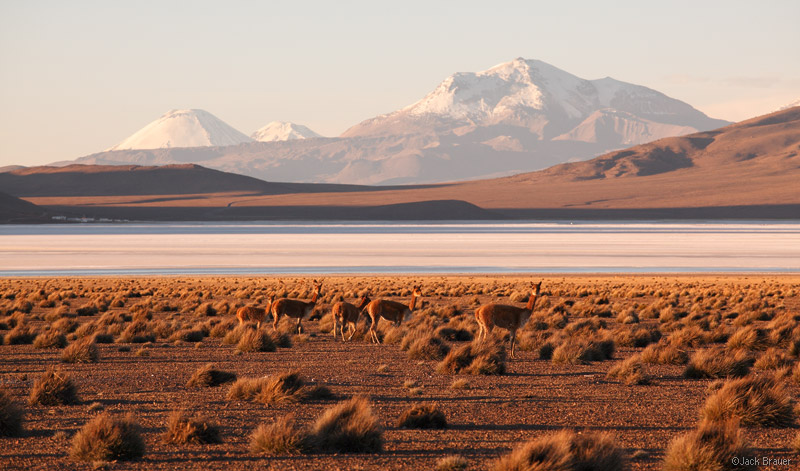 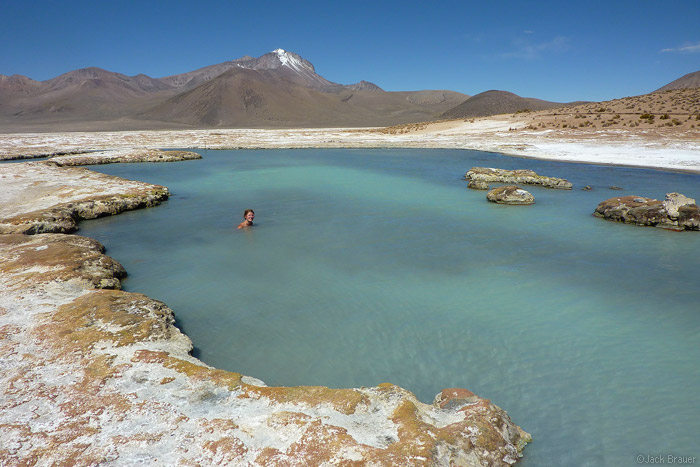