The Wind River Range forms 110 miles of the Continental Divide in central Wyoming. Notable for its plethora of alpine lakes, its soaring granite walls, and some of the largest glaciers in the US Rockies, the Winds are a supremely majestic mountain range and a paradise for backpackers, climbers, and fishermen.

It’s been eight years since my last backpack treks in the Winds, and I’ve been excited to get back ever since. Last week Claudia and I went up there and did an eight-day, ~55 mile backpack trek through the southern portion of the range.

See lots more photos from our journey below! END_OF_DOCUMENT_TOKEN_TO_BE_REPLACED

With our San Juans still covered in quite a bit of snow up high, earlier this week we drove east for 3 nights of backpacking in the Sangre de Cristo Mountains where the snow is mostly gone and summer backpacking season is well underway.

We camped the first night up near treeline below Mt. Lindsey, a fourteener I have not yet climbed. Feeling motivated, I set my alarm for 3:00am in order to hike up to the 13,400 foot summit of the “Iron Nipple” (seriously) for sunrise. This rugged peak offered a great vantage point to watch the sunrise light on Blanca Peak, the monarch of this mountain range.

See lots more photos from the rest of our trip below! END_OF_DOCUMENT_TOKEN_TO_BE_REPLACED

The Great Sand Dunes in southern Colorado are perhaps the most unique landscape in the Rockies, with 700-foot tall sand dunes nestled at the foot of 13,000-foot mountains. Winds that blow across the vast San Luis Valley carry sand grains which become trapped by the towering Sangre de Cristo Mountains, and the streams that flow out of the mountains keep the sand in one place, resulting in the tallest dunes of North America.

Last week we spent 3 days trekking around and through the Great Sand Dunes. Similar to a trek I did back in March 2009, in which I circumnavigated the entire dunefield, we hiked up the Sand Ramp Trail along the east side of the dunes, then this time instead of circling around the entire dunes we cut directly through the dunes from north to south back to our starting point.

The morning after returning from our previous Escalante backpack, we embarked on another even more adventurous trek – this time into the slickrock country just east of the town of Escalante. For years I’ve driven the spectacular stretch of highway between Boulder and Escalante and always wondered what it was like up amongst all that slickrock. During this trek we would find out! END_OF_DOCUMENT_TOKEN_TO_BE_REPLACED

The Escalante region is one of my favorite areas in the southern Utah desert. Though perhaps less impressive at first glance than other Utah destinations, a little bit of hiking reveals countless deep canyons and slots. The variety of canyon country around Escalante is staggering.

I wanted to show Claudia a few of the classic canyons off the Hole in the Rock Road, so we backpacked down in there for two nights, establishing a base camp from which we could explore several narrow canyons on day hikes.

One day we visited one of the more popular canyons around here, Neon Canyon, but unfortunately while we were there it was mobbed by a large group of backpackers which diminished the mystical experience of the place a bit. I wasn’t able to produce any better photos than from my previous visits to Neon, so I haven’t posted any here. I think it’s a sign I’m getting older when I start to have more and more stories about how things “used to be”! For example during my first visit here back in the 90’s before Escalante became a national monument, my friends and I were the only people around for many miles and it felt like a true desert wilderness. We even camped right underneath the Golden Cathedral, something that would probably be considered quite disrespectful today. Maybe it was then too…

Despite my griping, there are still many empty canyons to explore and plenty of solitude to be found out there!

As winter drags on, there are times when no matter how good the snow is, all I can think about is getting out to the desert for some warm weather backpacking. Such was the case last week when Claudia and I drove over to Utah for four days of backpacking in the Needles District of Canyonlands National Park south of Moab. And what a refreshing trip it was, with exciting weather and some fantastic light to photograph.

The trip also provided ample opportunity for me to test out my new Sony A7R 36mp camera matched up with my favorite Canon lenses. Since this is a popular new camera, and my first new professional camera in over four years, I’ll write a brief mini-review at the end of this post. 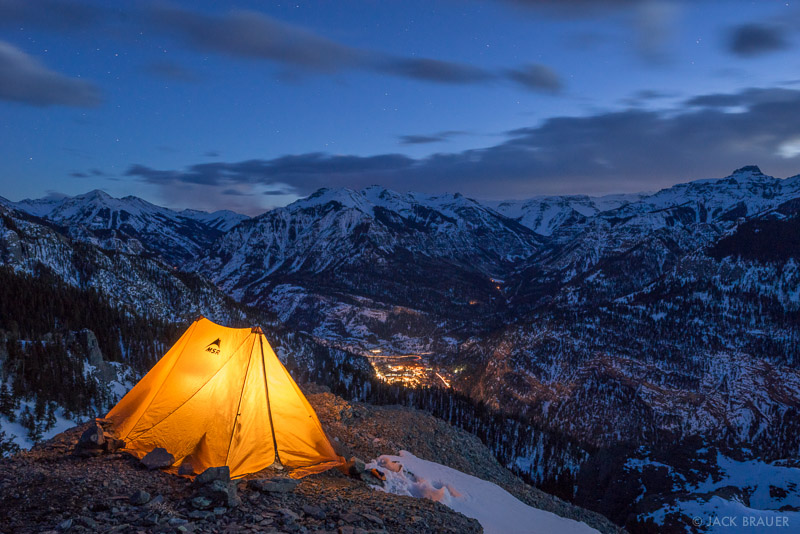 Eager to test drive a newly purchased camera, I headed out yesterday for a night of winter camping up on the “lower” Bridge of Heaven overlooking the town of Ouray, Colorado. I found a ridiculous spot to pitch my tent, right on the point of a precipitous rock outcropping! This airy perch provided a spectacular scene for tent photos, as well as an island of dry rock amongst the snow to cook and relax in ease. 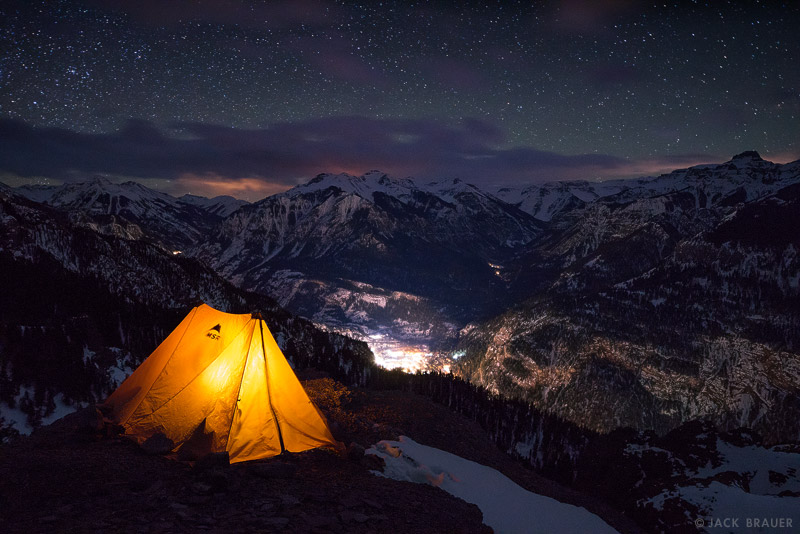 The evening was calm and quiet at first, but once I got into my sleeping bag the wind whipped up and shook the tent all night long. Though I knew the tent was solidly anchored down with rocks, the unnerving ruckus kept me awake most of night anyways. 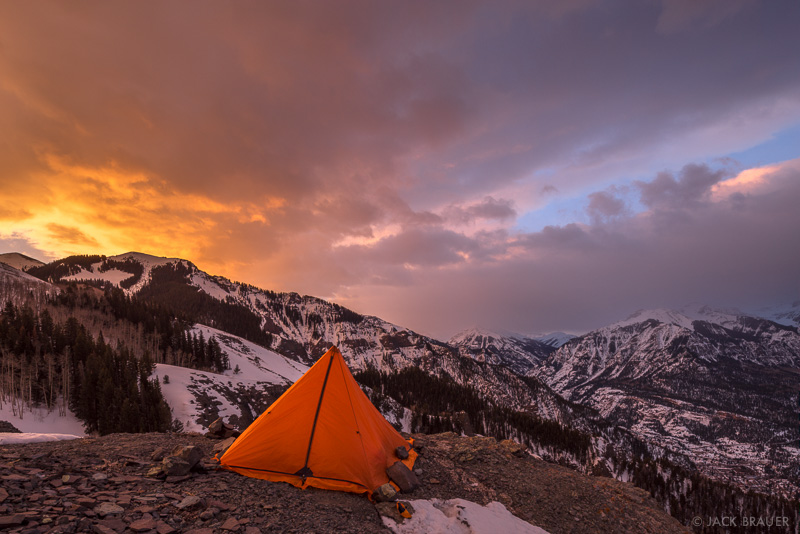 The morning brought a colorful sunrise along with a quick morning snowstorm before I packed up and headed back down. Thanks to Steven from Texas whose infectious enthusiasm to get out for some winter hiking ended up inspiring me to get out and make the trip!

On Wednesday Claudia and I skied along snow-covered County Road 7 to the Blue Lakes Hut, one of five huts in the San Juan Huts system here in southwest Colorado. These small but cozy huts provide great winter base camps for exploring the remote northern side of the Sneffels Range.

The Blue Lakes Hut is situated in small meadow a short distance from the summer Blue Lakes trailhead. From the hut you have a foreshortened view of the summit of Mt. Sneffels (14,150 ft). There are south facing windows that let a good amount of light in, and a wood stove that cranks so hot that we had to open the windows at night!

We had hoped for some decent tree skiing on the slopes above the hut, but unfortunately all we found was impenetrable forest and flat meadows. After two hours of breaking trail through the powder on switchbacking old forest roads with no skiable terrain in sight, we pulled the plug and basically skied back down our skin track with the occasional bushwhack mixed in. A bit frustrating, but once we were back in the hut a hot cup of gluhwein made everything ok! I think there are some worthy ski descents in the area up in the higher peaks, but they are far from the hut and would require a full day tour and stable avalanche conditions.

I just dug up this photo from deep in my archives while searching for a photo request of this mountain. I took this shot way back in October 2003, just over ten years ago! Back then I was in the early stages of being serious about photography. So much has happened in my life and my photography in the decade since then… It almost seems like it should have been 20 years ago, not just ten! It’s so amazing how much life you can fit into ten years. And it makes me wonder what’s in store for the next ten years…

Anyhow, Notch Mountain, in the Sawatch Range just south of Vail, Colorado, has a perfect front-and-center view of Mount of the Holy Cross and its east facing cross couloir, made famous in 1873 by legendary wilderness photographer William H. Jackson. In the early 20th century, the mountain became a destination of Christian pilgrimages, and a rock hut was built on Notch Mountain (very close to where this photo was taken) for shelter during Sunday mass at 13,000 feet. The hut is still there, and back in October ’03 my friend Todd and I backpacked up there and used it for shelter ourselves. This was a memorable trip, so I thought I’d write up a trip report, ten years later. END_OF_DOCUMENT_TOKEN_TO_BE_REPLACED