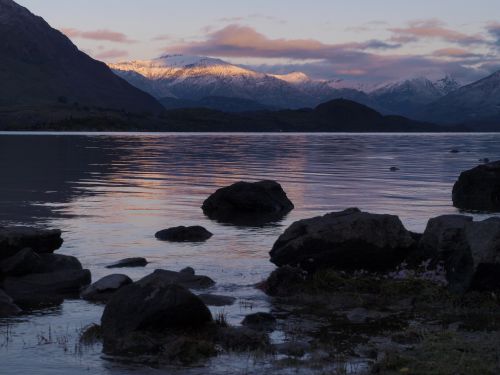 After my time in Mt. Cook Village, I caught a bus to Wanaka, a small town on the shores of Lake Wanaka at the foot of Mt. Aspiring National Park. This town is pretty nice… lots of green trees and great views across the big lake towards the snowcapped peaks to the west. On a nice sunny day I took a really long walk along part of the lake shore – a long, flat, easy walk that felt great for my legs after the rugged hiking of the previous days. There’s a great cinema here that has all comfy couches inside, and they serve wine and drinks during the show. Why aren’t all theaters like that?

I discovered fairly quickly though that Wanaka is not a great base for hiking, as many of the trails require a drive to reach. There are shuttles available, but they are way too expensive for the relatively short drive you get; plus you’d also have to arrange a return trip. So, with a poor weather forecast anyways, I got back on a bus and headed to Queenstown, with the intention of renting a car and returning.

Queenstown is an amazing little city and a base of operations for much of the South Island activities. It’s situated along the shores of the giant Lake Wakatipu, with the rugged Remarkables mountain range towering spectacularly overhead. There’s a lot more happening in Queenstown than elsewhere I’ve been, and it was refreshing to stay in a hostel full of friendly people who wanted to go out and do stuff. Not that other hostels weren’t friendly, but there’s just more people and more fun to be had in Queenstown.

Anyhow, I did rent a car, so now I have wheels! It’s a little Nissan Sunny econo car, and I’ll have it for two weeks at least. The price was surprisingly affordable, especially when compared to the relatively expensive bus fares in New Zealand. It is a bit nervewracking though to drive on the left side of the road, and after a couple days with the car I still hop into the left-side passenger door from time to time, only to discover that there’s no steering wheel on that side! Anyways, maybe it’s in my American genes, but it feels great to have the freedom to cruise wherever I want, whenever. Now I can be even more spontaneous with my travel plans.

So, I am now back in Wanaka, and after doing a quick sunrise hike this morning, I’ve decided to take off for the West Coast. I do want to come back to Wanaka, but the main hike I want to do here is currently closed because of lambing season, so as not to disturb all the little youngsters grazing on the mountainside. The other hikes I want to do here are more major endeavors which will require a better weather forecast than we’ve got now. So I’m off to the West Coast, to check out the rainforest, waterfalls, beaches, and glaciers. I’m not sure how long I’ll be out that way, or what exactly I’ll be doing (except probably getting rained on a lot).

2 thoughts on “Wanaka and Queenstown”