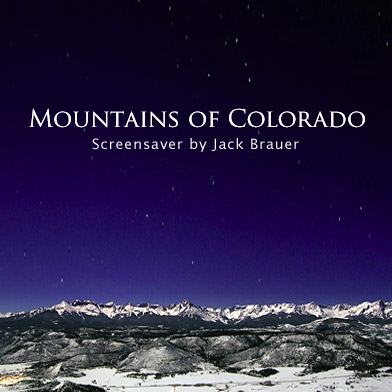 I am pleased to announce the release of my new screensaver “Mountains of Colorado” featuring 120 of my favorite photos from throughout the Colorado Rockies. The images are big, sized up to 1800 x 1200 px, so they will look nice even on larger monitors. It is pretty sweet to view them so much larger than on the website, if I say so myself!

On Saturday I tried snowkiting for the first time! Notice I said “tried”. I more or less got my ass handed to me! My friends were ripping it up though… I can see how this sport could get addicting. I can’t say I got the hang of it yet, but I was on the verge of the cusp of starting to ride a little bit with the little trainer kite. Then I tried the 9 meter kite and almost got blown to the Front Range. I need a massage. And more practice.

I finally got out again today to shred some powder… such good snow out there right now after a week of on and off snowfall. But, the avalanche conditions are still very dangerous so we remain on the easy routes. Over the last two days, CAIC has been blasting some of the larger avy paths along the highway with both howitzer and helicopter, and the resulting avalanches and debris are impressive – including some huge slides off Mount Abrams which are even visible from Ouray, as well as big natural slides on the bigger slopes throughout the area.

Colorado’s awful avalanche season has even made it into the news on Huffington Post, where Dale Atkins, president of the American Avalanche Association, is quoted: “We have to go back 30 years to see this kind of widespread danger. It’s dangerous inside ski areas, outside ski areas. A lot of folks who have only been here two, five, 10 years haven’t ever seen or experienced a snowpack like this.”

UPDATE: Check out this incredible video shot near Red Mountain Pass the same day as our above outing. This is what I’m talking about! Can’t believe these guys were railing this terrain in these conditions, but all’s well that ends well, I guess. NSFW! 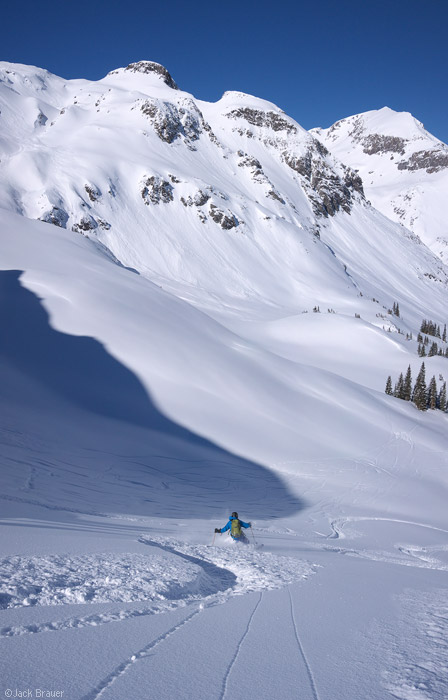 Hank carves some fluffy powder on a gorgeous bluebird day in the San Juans, Colorado. 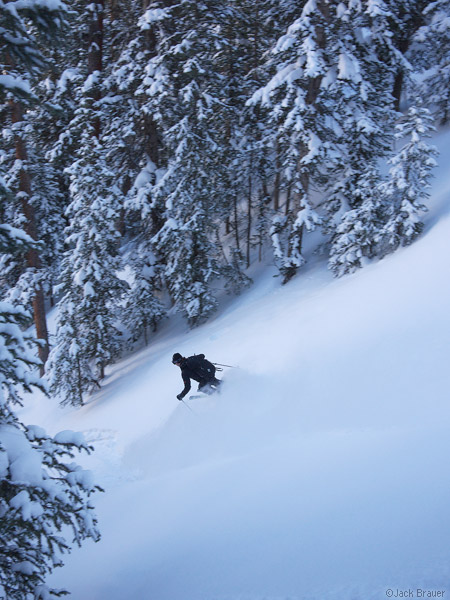 As I mentioned in my last post, the avalanche conditions are extremely tender right now in the San Juans. Our snow pits revealed 2-3 feet of recent snow clinging precariously to 2-3 feet of rotten sugar snow – the worst winter avalanche ingredients possible. There is widespread “whoomphing” and shooting cracks. We took a conservative descent route, practiced our best safety protocol on the way down, and managed to stay out of trouble. 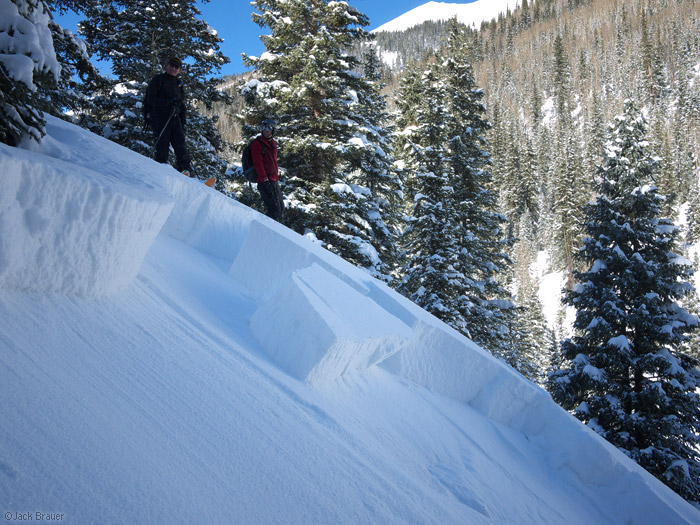 Here’s a picture of a slab avalanche in the gully on our way out (it had already slid naturally before we got there). In conditions this bad, any steep slope, not matter how short, has the potential to bury a person. We skied out of there on pins and needles, feeling that perhaps it’s not the time to be out in the backcountry at all, no matter how fluffy and tempting that powder is.

The snowpack is so fundamentally screwed that I can’t imagine the conditions improving anytime soon. It may be months before we can ride steeper lines again – maybe not until spring. The good news is that I’ll get a lot of work done this winter! 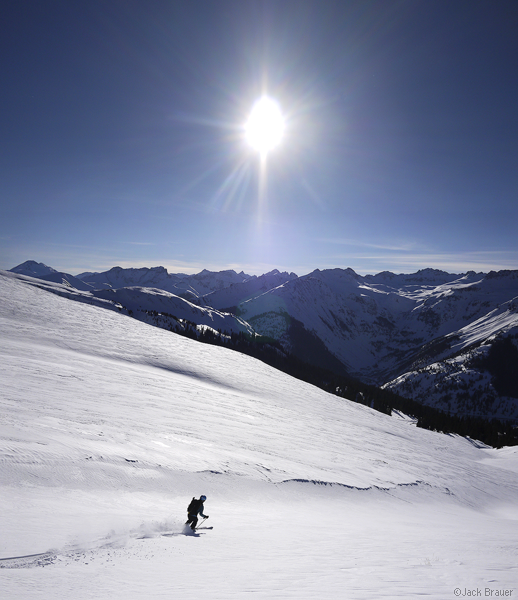 Aimee getting some fresh tracks on her birthday on Wednesday. Earlier this week two feet of snow fell on top of an extremely thin and unstable snowpack, creating super sketchy avalanche conditions and numerous avy accidents across Colorado. So we’ve been sticking to the tamest routes of all, avoiding any avalanche terrain whatsoever. In any case, it feels great to get high in the San Juans again! Stay safe!

After the most stressful and frustrating two days of flying that I’ve yet experienced, I’m finally back home in Colorado. In the grand scheme of things I suppose that two days, no matter how stressful, is a pretty quick time to travel from the tip of South America to the center of North America! But for a 21st century man it was just a pretty crappy series of delayed plane flights.

The nice thing, though, about living on Colorado’s western slope is the opportunity to fly directly over the Rockies whenever flying through the Denver hub. The half-hour flight yesterday from Denver to Montrose was one of the more scenic ones I’ve done, since we went right after the sun set, right after a snowstorm cleared. I was snapping away at the window with my camera most of the time, happy to have a nice consolation flight after such a long two sleepless days. See more shots below! END_OF_DOCUMENT_TOKEN_TO_BE_REPLACED 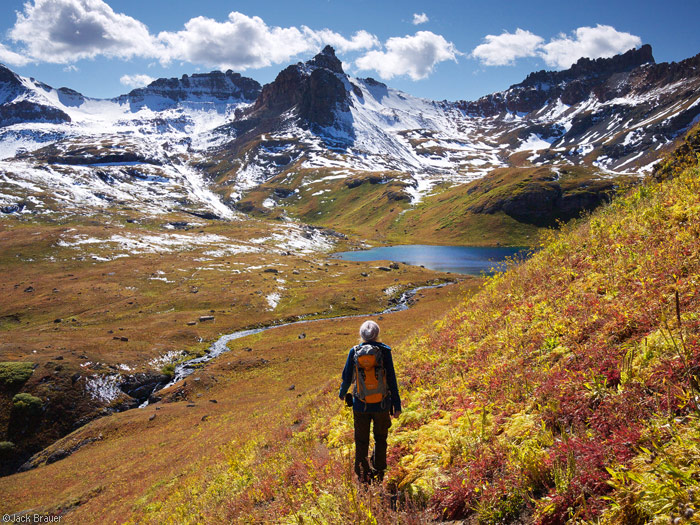 Today we took advantage of the glorious blue sky weather by hiking up to Ice Lakes Basin to check out the autumn colors up on the tundra there. It was a nice mellow day in the mountains, and a fitting farewell hike to Colorado! (More on that in the next post!)

I had a chuckle when we spotted some ski tracks in the snowfield at upper left in the top photo. Hardcore!

Last week we did a 7-day loop trek in and around the Needle Mountains, the rugged heart of the Weminuche Wilderness in Colorado’s San Juan Mountains. As usual, we had some crazy weather during our trip, including lots of lightning, thunder, and several stunning sunrises and sunsets. See lots more photos below! END_OF_DOCUMENT_TOKEN_TO_BE_REPLACED

Last week we spent 6 days backpacking around the famous Maroon Bells in the Elk Mountains of Colorado. The photos pretty much tell the story so I won’t say too much else except that it was another great trek in Colorado!

See many more photos below! END_OF_DOCUMENT_TOKEN_TO_BE_REPLACED