On Friday my fiancé Claudia and I are heading out on a big adventure to South America for three months! We’re flying to Buenos Aires, Argentina, where we’ll hang out for a few days, then we head west to the city of Mendoza, which lies at the foot of the high Andes near Aconcagua (the tallest mountain in the western hemisphere!) Mendoza is one of my favorite cities and I look forward to relaxing there for a while, sampling the local Malbecs, and scoping out the situation in the mountains. Early October is springtime there so I’m not sure how much snow will be in the mountains still. I’m assuming quite a bit.

Anyhow, the rough plan is to work our way down the Andes, on both the Argentine and Chilean sides, doing as much trekking as possible along the way, eventually ending up in Ushuaia at the tip of Patagonia by January. I am excited to visit a bunch of new places, including the volcanoes of the Lakes District, the lush forests of the Aisén region of Chile, and who knows what else. And of course we’ll have to return to the popular and spectacular mountain ranges of Torres del Paine and El Chaltén (above).

I’ll be posting regularly on my blog while we’re traveling down there, so be sure to check back often. You can also follow me on Facebook! 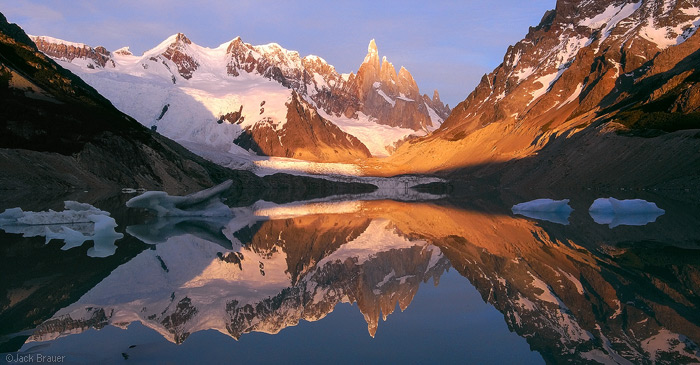 Here’s one more Patagonia photo from the vault. I’ve been on a roll lately digging these ones up. These last three photos I’ve posted are digital shots from the Ricoh GX100 camera. When I returned home from my month in Patagonia in 2007, I mostly forgot about all these since I was concentrated on editing and scanning my 4×5 film collection from the trip. So it has been fun to browse through these and find some forgotten gems.

This photo here is the famous Cerro Torre reflected in the glacier-fed Lago Torre. I took this shortly after an earlier, wideangle shot of the same scene with the 4×5 camera. That morning was one of the luckiest photo shoots I’ve ever had – to have this lake so calm in this notoriously windy place is extremely rare!

To add to my stoke after the shoot, this was only the second morning of a week-long outing. I was prepared to wait numerous days camping near this lake to hopefully score some good light conditions, so having it happen so soon freed me to continue on my trek to other valleys and adventures.

This photo shows one of the best summit views I’ve ever experienced, from atop Cerro Madsen, with a front-and-center view of Monte Fitz Roy, near El Chaltén, Argentina. This photo requires a bit of contemplation to begin to comprehend the enormous scale here. Consider that I took this photo standing on a 1800m (~6,000ft.) summit, with glaciers flowing around and below me. Monte Fitz Roy is 3400m (~11,200ft.) tall. This means that I’m looking directly up at a rock monolith towering a vertical mile above me, when I’m already standing on a lofty summit!

I feel like whenever I talk about Patagonian mountains I always end up babbling numbers of vertical feet. I think that’s because these kinds of mountains do not fit inside our minds; our brains simply cannot grasp the enormity, even when we’re standing there seeing it with our own eyes. The only way to make sense of it is to assign numbers and compare with mountains we’re used to. For instance, for those of you familiar with Colorado, consider that if you were standing at Maroon Lake near Aspen, looking up at the famous Maroon Bells, it would be roughly equivalent of just the rock face here on Fitz Roy. That begins to explain the enormity of the Patagonian landscape. 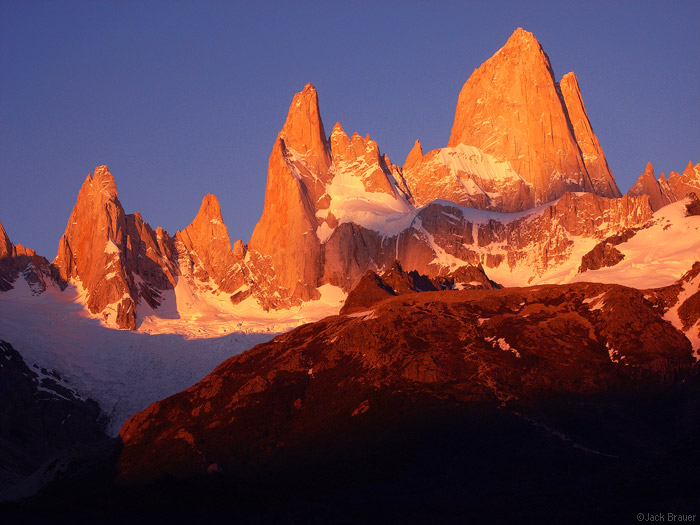 Here’s another Patagonia photo that I just dug up from the vault. I don’t think alpenglow gets much better than on Monte Fitz Roy in Argentine Patagonia! The peak towers ~8,000 vertical feet from where I was standing at the time. I took this with my trusty old Ricoh GX100, which was my digital supplement to my 4×5 camera on this trip, in November 2007. I still use the camera for snowboarding shots.

I noticed that I have quite a few sleeper Patagonia photos in my archives, so I’ll probably post a few more in the upcoming days. 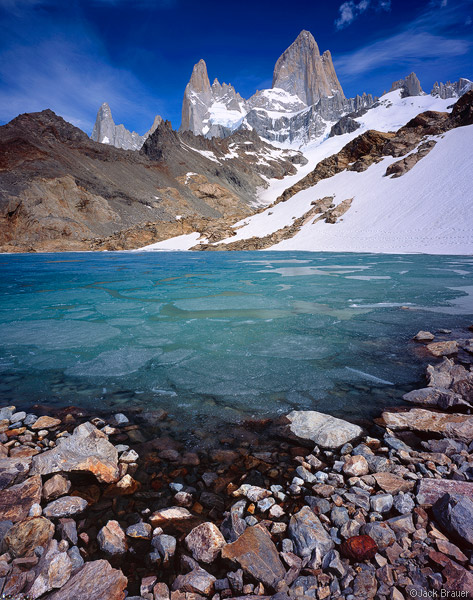