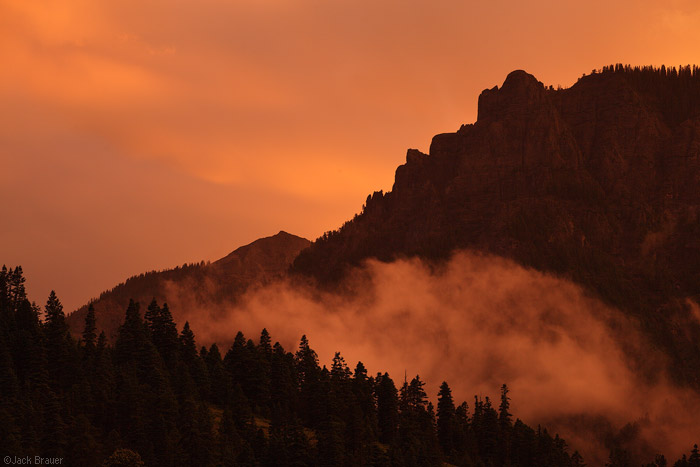 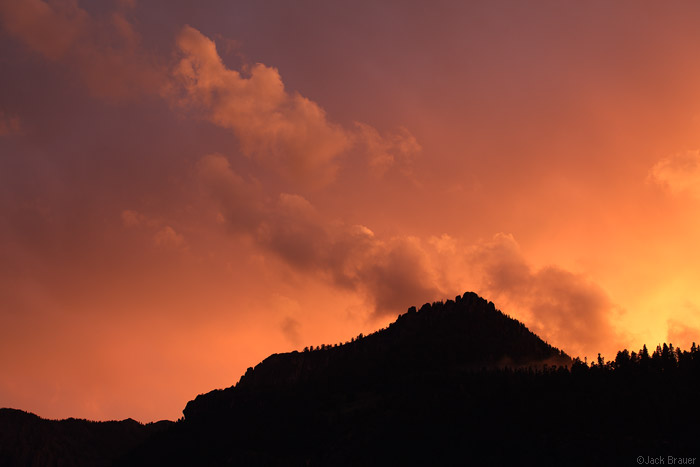 This summer has been notably excellent for the quantity and quality of sunsets and sunrises here in the San Juans in southwest Colorado. It seems that almost every night or every other night there’s an incredible sunset. I don’t often wake up early enough for sunrises, except for when I’m camping, but then too I have seen a number of great sunrises.

I’ve had summers here when I’ve thought that there haven’t been many good sunsets/sunrises, but I always thought that I’ve just missed them – that my own timing was off. Only this summer have I realized that the “light” season can be much like a snow season – some are simply better than others. And some, like this summer, are outstanding!

The reason has been the predominately stormy/cloudy/rainy weather we’ve had here the last few months, but there always seems to be gap of clear sky at the horizon which the sun beams through, lighting up those clouds at the last (or first) moments of the day. As far as I can tell, this means that the stormy weather has been mainly located on and around the mountains themselves, while the western plateaus and deserts have stayed clear.

I have managed to capture a number of these fantastic sunsets and sunrise with my camera while hiking and backpacking, but I must admit that many or most of these light shows have just been admired without camera, at friends’ houses or just running outside of my own house in Ouray when I notice the funky light. The two photos above, in fact, were taken from the street right in front of my house on Monday evening. It was raining like crazy most of the day, and even during the sunset, but still somehow the sun snuck through at the last few minutes.

I’m not sure that these light shows will continue, however, with a forecast of clear, sunny skies for the foreseeable future.

One thought on “Summer of Light”