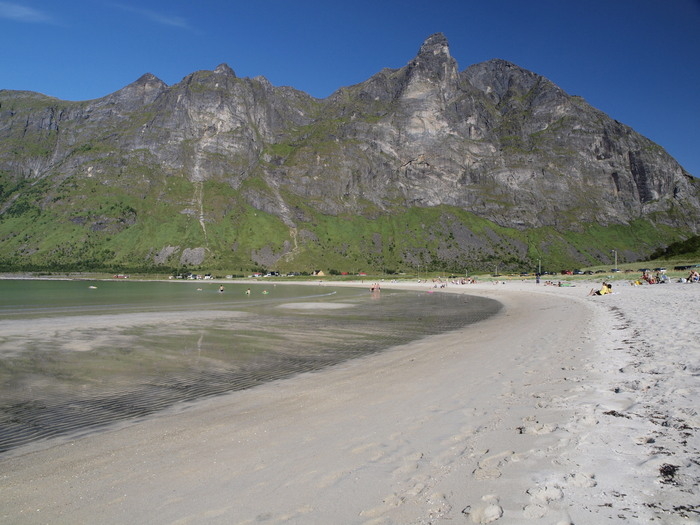 Last week I was pretty much off the radar, traveling around various mountain areas in northern Norway and car camping the whole time.

After leaving the Lofoten islands, I headed to the famous Stetind mountain, a mind-boggling 1400m sheer granite spire of a mountain, and camped a few nights there, scoring a lucky sunset during a break in the rain showers. From this point on, though, I would be plagued by gorgeous warm sunny weather. Great for hanging out; not so great for the photography, or for sleeping in in the tent.

I headed north to Senja, an island that my guidebook said is the only place to rival Lofoten, but less crowded. The way I’d characterize Senja, though, is as a mini-Lofoten – the mountains and fjords all seem a little bit smaller, but still dramatic how they rise sharply from the ocean. I ended up camping at a beautiful beach surrounded by towering peaks. It was a popular place with beautiful weather, and lots of Norwegian families were out enjoying the sand and water, while I just laid out on the sand listening to my iPod.

I only stayed one night there though, then headed to Tromsø, where I did a quick pitstop to load up on food, maps, and also an English book. What a difference it’s been to have a book! Suddenly I’m not so bored during the downtimes. Anyhow, from there I went to the Lyngen Alps east of Tromsø. These mountains are rugged and glaciated, but they lack the unique character that so many other Norwegians peaks have, so after a few days there I bailed and went to the nearby Otertind mountain.

Situated in the Signaldalen valley, Otertind is perhaps Norway’s most beautiful mountain in my opinion, and certainly one of the most beautiful peaks I’ve ever seen. From a certain profile it rises up about 1800m in a perfectly symmetrical curve, leading to dual pyramid summits. Anyhow, I camped a few nights there at a random spot next to a big wide shallow river, and fought the mosquitos, read my book, drank beer, and took photos.

Satisfied with my travels in northern Norway, and looking (and perhaps smelling) pretty rugged by then, I then headed back down south again.

One thought on “Senja and Lyngen Alps”