At 6:00am this morning, I met up with 12 friends in Ouray to head out for a day of cat-skiing in the mountains near Purgatory. Packed in four vehicles, we headed up Red Mountain Pass in the darkness and dumping snow. Several miles up the pass from Ouray, my friends in the lead truck noticed a set of tire tracks disappearing off the road into oblivion. Anybody who has ever driven the pass knows how scary steep and treacherous this road is – in places carved through sheer cliff mountainsides. A closer look down into the canyon revealed the dim glow of headlights in the bottom about 400 feet below.

As luck would have it, about half the people in our crew today are on the Ouray Mountain Rescue Team, and by the time I got out of our truck, my buddy Jeff was already harnessed up and rappelling off a truck hitch down into the gorge with his headlamp. Part way down, he stopped at a 50′ cliff and was able to yell down to the driver. Miraculously, and to our great relief, the driver responded back that he was ok.

Basically, as we learned in due time, this semi-truck driver was driving up the pass when another semi-truck came around an inside corner a little too wide. The outside driver gave him a bit too much room, and once the wheels fell off into the soft snow on the edge, it was too late and the truck slid off the road into the chasm below, launching off a 50′ cliff midway down. Somehow the semi flipped around and hit trailer first, which was probably an enormous stroke of good luck which may have saved the driver’s life. Although the truck was completely crumpled and the engine torn out, miraculously the driver survived with only minor injuries. And as further luck would have it, our caravan of Ouray Mountain Rescue Team members just happened to be passing by just a few minutes later. Unbelievable.

Perhaps the strangest thing to me is to imagine how the driver felt, after surviving the death ride of his life, stuck in the bottom of a steep snowy gorge in the middle of nowhere, in the midst of a full winter snowstorm, and then just a few minutes later a rescuer rappels down into the gorge asking if he’s ok! So strange.

Anyhow, while Jeff and the others worked on getting down to the river to help the driver, calls were made to the rest of the rescue team and within minutes a whole array of rescue trucks, firemen, and an ambulance were on scene to help out. The firemen set up a flood light while the rescue team prepared to haul the driver out of the steep ravine on a stretcher (still unsure of possible injuries). It was pretty amazing to me how many people were up there so fast to help out. I’m not sure if they all sleep in their clothes or what, but it was definitely a cool thing to see.

In the picture above, you can barely see part of the crumpled wreck of the semi trailer down in the bottom of the gorge. Clint, Kevin, and Jeff hauled the driver up this couloir, but the truck itself had fallen off a much more treacherous section of cliffs left of this photo.

Once the driver was safely hauled up out of the snowy canyon and into the ambulance, we piled back into our cars/trucks and resumed our mission over the pass to go cat-skiing. We had only lost a few hours, and there was no hurry as the snowcat would be waiting for us in Purgatory (Durango Mountain Resort). 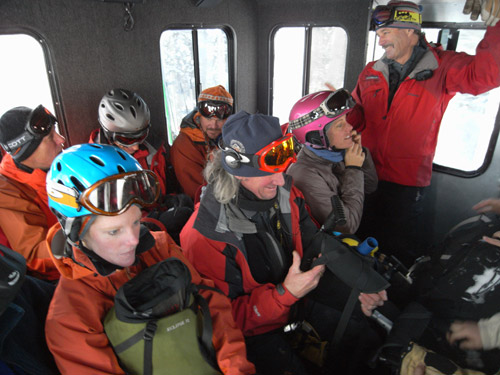 Well here we are inside the snowcat, happy about the outcome of the morning’s strange turn of events, and pumped to ski and snowboard some perfect untracked powder all day long.

Little did we know that after 3 or 4 good runs, the snowcat would break down, stranding us four miles from the ski area. The Durango Mountain ski patrol finally came to our rescue, dragging us out with towropes behind their snowmobiles. Despite our immense disappointment, all we could do was just laugh at the random craziness of today.

As I write this, I kind of want to go to the corner pub for a beer and a sandwich, but I’m wondering if I’d be better off just staying home for the remainder of the evening. Who knows what else is in store on this cursed day?