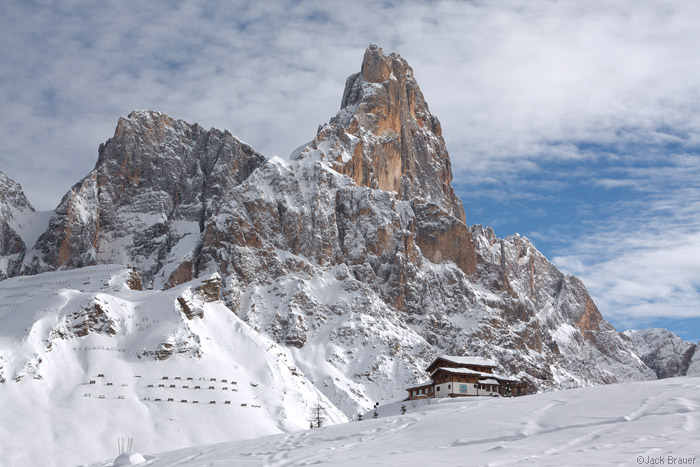 I am in the town of San Martino di Castrozza this week. I was here during my first visit to the Dolomites six years ago, and this was one of my favorite spots. The Dolomites boast many amazing jagged peaks, but the peaks of the Pale di San Martino range are impressive even by Dolomiti standards. And perhaps the most impressive of these peaks is Cimon della Pala, a rugged 3184m peak that towers over Passo Rolle and the town of San Martino far below. I’ve never seen a peak that has so many faces as the Cimon… depending on your altitude and angle of view the shape of the peak morphs into entirely difference profiles and characters. Here’s a photo of the same peak in the summertime, from a different angle, for example.

I feel obliged to mention that this beautiful peak crushed my spirits on my first day here on Monday… though really it was my own fault. I had plans to ski up to some broad meadows to photograph the peak at sunset, and a few hours before, I was parked at the pass, had my backpack packed, my boots on, and my skins on my skis. I was ready to go. But it was snowing pretty hard at that point, and I started to think pessimistic thoughts about the weather prospects, and after waiting a little while in the car, I succumbed to that pessimism and made the horrible decision to abort my mission and drive back to town. Why I didn’t just wait up there for an hour or so, I don’t know… but of course a few hours later the stormy clouds started miraculously lifting off the peaks. Seeing what was happening, I jumped back into the car and rushed back up to the pass. As I was reaching the pass, the clouds were swirling around Cimon della Pala, and the sunset light was painting the peak and the mist with striated bands of glorious orange light. It was one of the single most incredible mountain scenes I’ve witnessed in my life. I parked the car and again made a stupid decision… instead of just finding a decent spot to shoot as quickly as possible, I ran around looking for the best spot, eventually tromping through waist deep powder to a location that really wasn’t any better than from right off the road. At the exact moment when I had my tripod set up and my camera mounted, the clouds closed in, the peak was gone, and the incredible show was over. I had missed the shot of a lifetime. I have missed many great photo opportunities before, but none have stung so badly as this one. I was in shock and felt sick to my stomach. I wanted to turn back time… but no, I just plain and simply blew it and I will never get it back. It was a real-life photography nightmare. I took the photo above the next day, feeling a bit empty hearted. 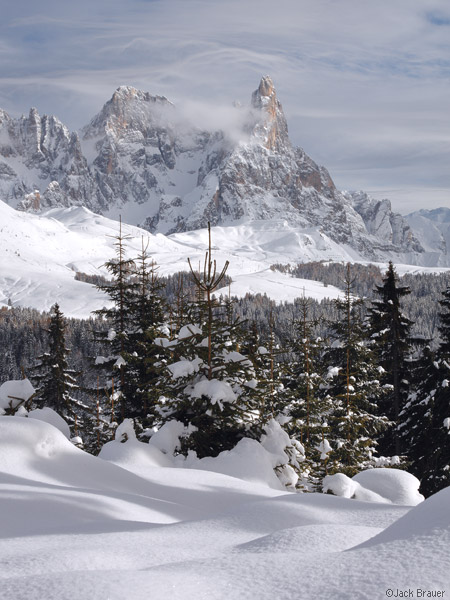 Anyhow, though I felt like renouncing photography for good on Monday, there’s nothing to do but keep at it, so on Tuesday I went on a ski tour to a perspective that I had wanted to get to on my first trip here, but couldn’t since I didn’t have a car that time. From this more distant perspective, Cimon della Pala stands straight and tall like a petrified rocket ship. 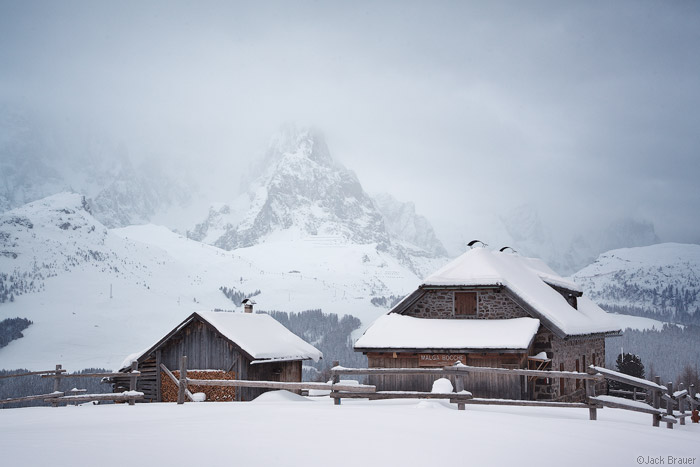 Unfortunately the next storm rolled in sooner than expected, descended onto the peaks, and there was no sunset to be enjoyed. Of course this time I stayed up there past sunset anyways… I didn’t want to take any chances of making the same horrible mistake again! This is Malga Bocche, a backcountry cabin that commands one of the most stunning vistas in the world… when it’s visible.

Today it is dumping snow… over a foot already. Perhaps I’ll get a chance for redemption when this storm clears! I will be there.

By the way, I must send a hearty “thank you” to Daniela Anderson, and her mother, who have generously hooked me up with an apartment here in town for the week. Daniela grew up in San Martino and runs a Dolomiti travel agency called The Alpine Adventure Agency, and we have been friends for several years now. Though I have not participated in one of her tours yet, I know that I can heartily recommend them, due to her vast knowledge of the area and her obvious and infectious love of the Dolomites. Thank you Daniela!