Here’s a couple photos from snowboarding this afternoon in the rugged peaks about five minutes drive from Ouray. March is here, and spring seems right around the corner, even though everything is still smothered in fresh snow. The sun is really getting higher in the sky these days, and the foot of fresh snow that fell last night had melted to a crusty 5 or 6 inches by the time we got out there for an afternoon run. Oh well… next powder day I’ll head out in the morning if I can. 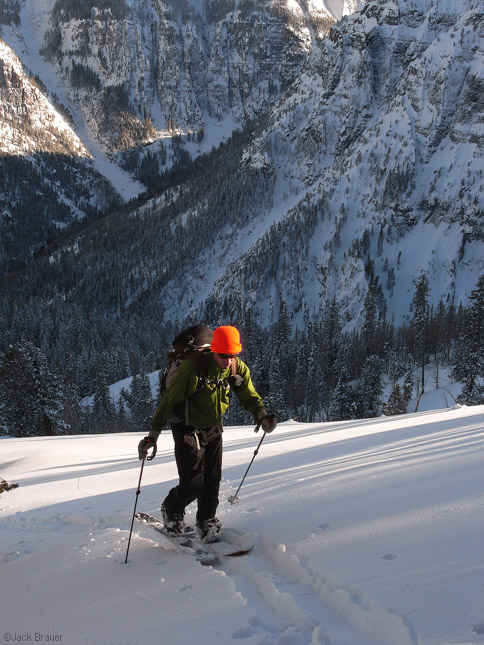 Here’s Parker splitboarding up in front of a rugged San Juan backdrop. END_OF_DOCUMENT_TOKEN_TO_BE_REPLACED

I am primarily a wilderness landscape photographer. I enjoy backpacking for miles and miles into the wilderness, oftentimes where no trails exist and I have to find my own way with just my map, compass, and instincts. Whenever I plan a trip, I think about the vistas I might encounter, and of course the potential for photographing these vistas. If you’ve taken a peek at my photo gallery yet, you’ll see that I really like the grand scenics. I savor those huge expansive views and unique perspectives on rugged peaks, and I try to capture those scenes on film.I spend hours pouring over topo maps, thinking about where I want to hike and camp. Topo maps can’t be beat for planning hiking routes, but when it comes to previsualizing potential photo opportunities, Google Earth is an incredible tool. 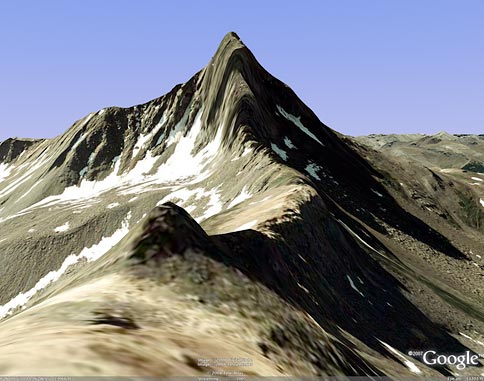 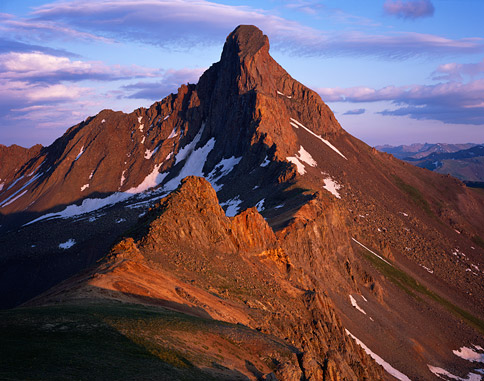 Wetterhorn Peak, a remote 14er in the Uncompahgre Wilderness of Colorado, as seen on Google Earth, and in real life. This is one of those unique views that I had seen while I was flying around Wetterhorn in Google Earth, and thought it was a great perspective. So I went there during a two-night backpacking trip – hiked to the location on a high ridgeline, and hung out for several hours keeping an eye on the clouds and waiting for sunset light. END_OF_DOCUMENT_TOKEN_TO_BE_REPLACED 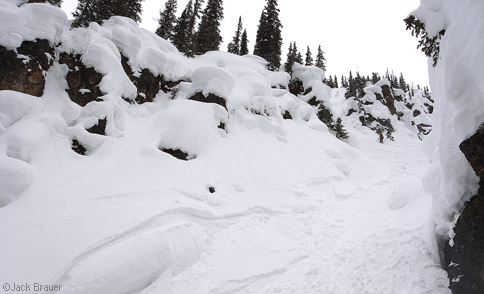 Click picture to see a large versionToday we rode what was perhaps the best snowboarding terrain I’ve ever ridden in my life. This was a long, steep, narrow gully that we had previously scoped out from a neighboring mountain. What I couldn’t see from a distance is that the sides of this gully were loaded with a plethora of fluffy pillows! Many backcountry riders might agree that the only thing better than a nice steep halfpipe gully is a long series of marshmallowy pillow drops. Well, this run was the ultimate 2-in-1 combo! END_OF_DOCUMENT_TOKEN_TO_BE_REPLACED

Here’s the classic video of some huge San Juan avalanches near the small town of Ophir.

I would totally get into this sport, if I was crazy. 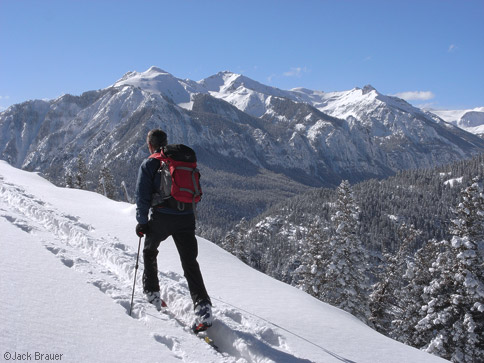 On Friday morning a group of us headed out to enjoy the foot of fresh snow that had fallen the previous day and night.  Our goal was the “Town Couloir”, a steep and narrow couloir that cuts through tall cliffs all the way to the bottom of the Ouray valley.  This lower altitude line is rarely in good shape, but heavy snowfalls this season have filled it in nicely.The bluebird skies and fresh snow had me excited to ride, but as we neared the steeper slopes at the top, we became concerned about the avalanche potential.  The foot of fresh snow was sitting on top of an older layer of crusty sunbaked snow.  Though the top layer seemed pretty cohesive, the terrain above the entrance to the couloir is like a huge funnel into the narrow choke, so any slide would have disastrous results.  After a brief discussion, we decided to do the responsible thing and turn back.  We skiied/rode down the flat traversing route that we hiked up… all in all a supremely crappy run.Even though I always hate turning back, it’s reassuring to know that my partners and I have the ability to do so.

My photo “Plitvice Waterfalls”, shown below, is by far my most popular photo. It seems to show up on Digg.com just about every month (much to the chagrin of the regular Digg members). Digg.com is a high-traffic web community that shares links to interesting web pages. I love to browse the comments on Digg, since they come from a seemingly random pool of viewers. Here’s some of the funnier comments I’ve read. 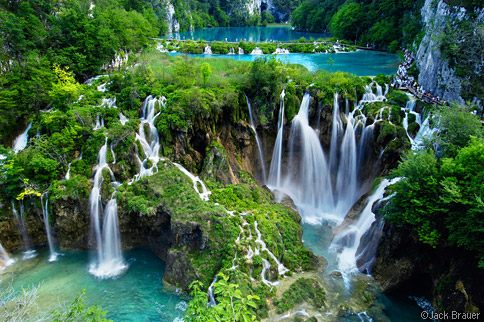 “If Jack Bauer’s gonna take time off from fighting terrorists to be a photographer, he seriously needs a better pseudonym.”“That would look really nice in my backyard.”“Reminds me of the jungle level in The lion king game for sega.”“Not an incredible photo. Just incredible scenery.”“F–k California and Florida, I want to be THERE.”“I mean, how many waterfalls do you *need*? And they’re all over the place! It looks like Croatia’s just trying to show off, and has no real sense of style about it. Like they just came into waterfalls and couldn’t *wait* to use all of them. Tacky.”“It’s mind-bottling.”“This should be the kind of place one can go to and enjoy a naked swim with his girlfriend without worrying about having pictures of his and specially her most beautiful ass being Dugg a day later.”“Seeing that makes me want to go outside again!”“i wanna build a huge tree fort and live there some day.”“it’s an in-game DX10 render from Crysis.”“These photos suck. simple as that.”“You know what this picture needs? boobies.”“Beautiful! I feel like urinating.”“Wouldn’t be Digg if this wasn’t on once a month.”“That’s not my pants! How on earth can that be paradise?”

I am going to kick off my new blog with the most terrifying story of my life so far. I’ve had accidents and close-calls before, but never have I been so sure of my impending death as I was on this day. Every time I tell this story it evokes powerful feelings in me. I don’t tell it often. 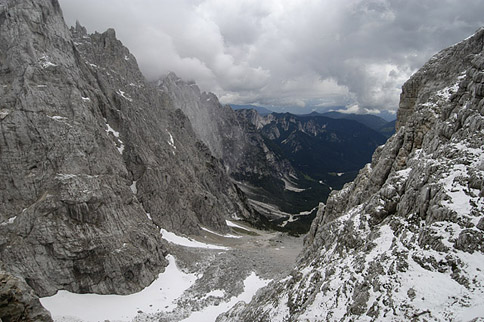 On Monday July 12, 2004, I started out on a four day hike in the Julian Alps of Slovenia, during which I would be staying the night at various mountain huts – large huts high up in the mountains where food, beds, and blankets are provided.I hiked up through Krnica Valley, a long narrow forested valley with high mountain walls on both sides, until I came to the head of the valley, which ends abruptly in a towering cirque. At this point you’d think that there would be no way to get up these vertical walls without ropes, but the trail turns into a “via ferrata” (Italian for “iron way”). Basically it’s a marked path that winds its way up through the vertical cliffs via the path of least resistance. There are cables and pegs bolted into the cliffs to grab onto during the hairy sections. So off I went, scrambling and climbing up and around cliffs and traversing on narrow ledges, all the time following the little red and white circles painted on the rocks to mark the path. I had just come off above a vertical section onto a flatter section about halfway up the mountain face when I was shocked to hear an awful low-pitched rumbling sound. For an instant I was confused, but before I could even think, I heard the terrible sound of a massive rockfall coming down towards me from above like a freight train from hell. I couldn’t see anything above, since the closest cliffs blocked the view, but I could hear that the loud rumbling was coming down towards me fast. At this point the entire mountainside was shaking badly, but I had enough sense to run uphill toward the nearest cliff so that hopefully the boulders would fly over my head. As I was running towards the cliff, about three or four paces away from it, I could see and hear the first rocks zipping past my head — luckily none hit me. I made it to the base of the cliff, which was only about ten or fifteen feet tall, and huddled in the corner as rocks cascaded over my head and bounced off nearby boulders. At this point even the cliffs I was clinging onto were shaking violently, and combined with the deafening noise of crashing rocks, I was convinced that the entire mountainside was collapsing in a major rockslide. I am sure you can imagine how helpless and terrified I felt at this point. The only things I remember thinking about were first of all how completely pulverized I would soon be and therefore how completely helpless I was, and secondly I just thought, no, I’m not done yet! I don’t want this to happen! END_OF_DOCUMENT_TOKEN_TO_BE_REPLACED